There are many holidays and celebrations that are more complicated to explain to children than others.  How do we find meaningful and age appropriate ways to explain holidays like Memorial Day, Labor Day, Veteran’s Day and the upcoming President’s Day to children under 5? We at Shine believe it can be done in thoughtful and innovative ways using books, music, art, cooking and dramatic play. In this week’s post we take take the daunting task of turning President’s Day into a creative and historical exploration by making powdered wigs, a coin rubbing collage and of course, eating ice cream (thanks George Washington)!

Shine offers workshops for all major holidays and celebrations and will even custom create a workshop based on your child’s interests (dinosaurs, space, bugs, weather, etc.). Please contact us for more information or to set one up for your child and some of his/her friends.

However you chose to celebrate this holiday or any, we hope it is done together as a family utilizing the tools children innately posses… imagination and creativity.

We all know that we celebrate Presidents’ Day on the third Monday of February, but what else do we know about Presidents’ Day / George Washington’s Birthday? Did you know:

So with another day off from school, what are some activities that can help teach kids about the importance of Presidents’ Day and our first president? Let’s start with a story, create powdered wigs and coin collages, and finish by eating ice cream! 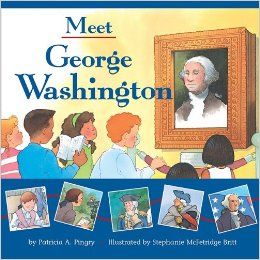 Powdered Wigs Craft:
In colonial America in the 18th century, wigs were very fashionable. They were often made with human, horse, goat, or yak hair. This trend came from Europe where men wore them to appear older and distinguish them from other classes. Many wore wigs to appear older and keep up patriarchal appearance. Different wigs were also worn for different events: evening wear, every day wear, business, and riding. Around 1715 lighter color wigs were very fashionable but it was difficult to stabilize the color of bleached wigs, so powder was used to give wigs a grayish/white tint. Make your own powdered wig with this craft from Holidays Central!

Quarters and Dollar Coin Rubbing Collages:
Beginning in 1932, a special quarter with Washington’s face was minted to commemorate the 200th anniversary of George Washington’s birth. The quarter was so popular that it replaced the previous “Standing Liberty” version. (CoinFacts.com) From 1999-2008, the reverse side of the quarter changed 5 times a year through the 50 State Quarters Program. In 2009 the District of Columbia and U.S. Territories were added. To honor our presidents, the US began minting $1 coins featuring their images in the order they served in office.

Ice cream!
Did you know that George Washington loved ice cream? In the summer of 1790, George Washington spent roughly $200 (that’s the equivalent of $5,000 in today’s money) on ice cream. An inventory of Mount Vernon after his death revealed 10 ice cream pots among the kitchen supplies! Grab a scoop of your favorite flavor and enjoy!

DIY ValentinesLiteracy in the First Five Years
Scroll to top