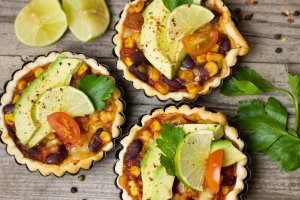 Contrary to popular belief, May 5th is not Mexico’s Independence Day. Cinco de Mayo commemorates the Mexican Army’s underhanded victory over the occupying French Empire at the Battle of Puebla in 1862 – 41 years after Mexico became a sovereign nation. During the Battle of Puebla, 4,000 Mexican troops defeated twice as many heavily-armed French soldiers, revealing the strength of the Mexican people to the rest of the world. In Mexico, the holiday is lauded as an important symbol of patriotism, commemorated with military reenactments and parades. In the United States, Cinco de Mayo has become a widespread celebration of Mexican-American culture – and a great excuse to explore the joys of muy delicioso Mexican cuisine with your children!

Here is a popular dish celebrated on “Day of the Child” that would double as a great Cinco de Mayo brunch for the whole family. Charbel Barker cooks this family-passed recipe with her two little boys. “This is a great recipe to teach your kids because there are very few steps,” Barker explains. Made with thick-cut ham, eggs, potatoes, tortillas, cheese, and refried beans – you’ll want for nothing! You can top with store-bought salsa or make your own from this fun four-step NY Post recipe.

Avocados are a great plant-based source of protein for kids. The creamy texture is an easy sell to the youngest solid-food-eaters. This recipe calls for ½ teaspoon of Serrano chili, which you’ll want to omit when mixing it up for the kids. If you have a lava stone mortar, all the better! Kids really enjoy the mashing aspect of guacamole making. Some recipes call for garlic, citrus fruit, cheese, cumin, or jalapeño. By comparison, this recipe uses just six simple ingredients and is best served with crunchy tortilla chips.

“I want my kids to know their culture as they grow up seeing dad cook and speak Spanish at home,” explains Chef Sanchez. He makes simple dishes at home – with a new ingredient thrown in as a twist. “Introducing new and different flavors to them is important,” he adds. “They don’t have to love it, but I want to expose them to it.” In his more recent cookbooks, he strays from the typical format of appetizers, entrees, and desserts. Instead, he offers sauces with versatile flavors that can give a Mexican twist to any menu. This paste delights kids with its tart and sweet dichotomy. The pasilla chili is mild and rich, balanced by the flavors of the wonderfully tangy tamarind fruit. Use as a marinade or rub with your red meat of choice. The sauce will stay fresh in a tight-sealed container for up to a week or can be easily frozen for later.

Made from 10 ingredients, this saucy, kid-friendly casserole combines shredded chicken, corn tortillas, cilantro, and queso añejo, a crumbled sharp white cheese. The tomatillo sauce is mild enough for your little ones, and you can choose to omit the jalapeños if necessary. If you prefer a vegetarian version, you can substitute quinoa and red beans for the chicken. Serve it with a traditional medley of steamed beets, cauliflowers, and carrots or a simple green salad would do just fine. Some people save this recipe’s enchilada sauce for eggs, tortilla chips, rice topping, or sprucing up meats.

From Chef Enrique Olvera at Cosme in the Flat Iron District, Courtesy of The Latin Kitchen

Chef Enrique Olvera is not only a world-renowned chef. The NY Times has suggested he could be “the king of NY” with authentic Mexican cuisine that extends beyond the stereotypes. Pujol, his Mexico City based restaurant, uses native ingredients like heirloom varieties of corn, wild greens, obscure chilies, even insects. Most of his recipes are highly complex with tricky-to-track-down ingredients, but this dessert is sinfully simple. All you need is condensed milk, fresh lime, cream cheese, frozen yogurt, and a pack of vanilla wafers.

Cooking is one of the many ways you can celebrate Mexican-American culture with your children. New York City residents can also visit the Brooklyn Children’s Museum for Spanish lessons, Talavera tile making, and Papel Picado crafting. The fifth of May is also opening day for the new hand-carved, disability-accessible carousel in the Greenbelt’s Willowbrook Park. Contact Shine to learn about the cooking classes and unique cultural experiences we offer area children.

What Are NYC Parks Doing For Earth Day & Arbor Day?Ways to Have a Meaningful Mother’s Day at Home
Scroll to top