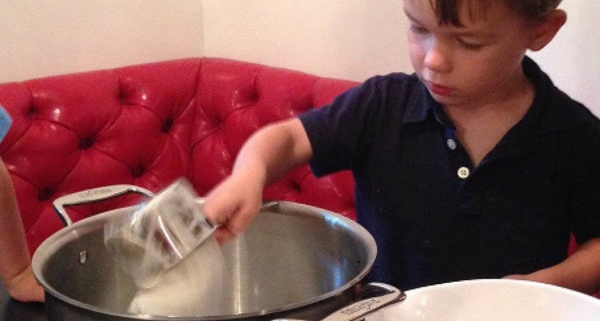 We recommend taking one of the Lower East Side Jewish Food Tours, or checking out the best places for Jewish food in NYC, if you haven’t already. But, by far, the most meaningful way to explore new cuisine with your kids is right at home in your kitchen. Rather than shooing your littles out of the kitchen, invite them in! Roll up your sleeves and get a little messy with these five kid-friendly Jewish recipes.

From the NY Times

Itta Werdinger Roth grew up in an Orthodox Jewish community in Australia, but married an American and quickly became a New York City sensation, known just as much for her traditional home-cooking as for her all-woman Hasidic rockband. Jewish food differs vastly around the world, but “everyone knows potato kugel,” she told the NY Times, adding: “There are two kinds: good and bad. It’s like a savory cake; you bake shredded potatoes with eggs and onions, and the inside comes out so creamy you eat it almost like mashed potatoes.” Cooking with kids doesn’t get much easier than this recipe consisting of just potatoes, onion, eggs, salt, pepper, oil, flour, and baking powder. This version is rooted in Lubavitch Women’s Cookbook Publications’ “Spice and Spirit,” which is thee cookbook for traditional Jewish cooking. From there, the recipe has been tweaked with subtle variations to get the perfect crispy-creamy textures.

P.S. If your kids really love potatoes, consider taking them to the 9th Annual NYC Latke Festival at the Brooklyn Museum on December 18th!

Liz Rueven is from Connecticut, but enjoys “probing the scene in NYC” for inspiration. Most of her recipes are kosher vegetarian, but this homemade kreplach recipe comes from the Ashkenazic Jewish cuisine her Nanny made. It’s a traditional dish enjoyed for Purim, the holiday commemorating the salvation of the Jewish people under Haman’s persecution in ancient Persia, but you can cook up this savory soup with the kids on any cool weather day for a satisfying treat. It’s a project, to be sure, but older kids enjoy the whole process of mixing and stuffing, so don’t shy away from this memorable experience.

From The Sephardic Heritage Cookbook

The Sephardic Heritage Cookbook doesn’t necessarily have a New York connection, but it is one of the top-selling Jewish cookbooks, after all. The recipe itself just seemed to appeal to kids and adults alike. First, what kid isn’t going to love asking for “kookoo?” Parents will like this egg-based dish because it’s similar to an omelet or frittata, but gives you the chance to sneak in loads of healthy vegetables and herbs. And it’s versatile. You can serve it hot or cold, as an appetizer or a main dish. You can serve it with bread, feta cheese, or plain yogurt. It keeps well in the fridge for several days or you can freeze it in tin foil.

Celebrity Chef Nir Mesika is the founder and executive chef of Timna, a modern Israeli restaurant in the East Village of NYC that was named “the best new restaurant” by USA Today in 2015. Braised short ribs was always his favorite Rosh Hashanah meal growing up, he says, because “the family was waiting for it all day long,” so dipping into the shared pot in the center of the table was so satisfying when the time came. Plan to spend some time on this recipe, but the melt-in-your-mouth textures and cozy flavors are bound to be a hit with everyone in your family.

Quinoa Salad with Pomegranate and Pistachio

Einat Admony is the chef and owner of Balaboosta in Manhattan, Bar Bolonat in the West Village, and Taim, as well as a regular consultant to the Jewish Food Society, an organization dedicated to preserving traditional cultural recipes. She recalls this favorite Rosh Hashanah recipe fondly. “When I was a child in Israel,” Admony said, “the high holidays meant peeling two whole cases of pomegranates for our family’s holiday meals. Out of the two cases and the resulting 20 pounds of seeds, we would get only a few small jars of pomegranate preserve. It was tiring, detailed work, and I used to hate it, but it would end up as part of our dinner, so I knew it was all for a good cause.” You can serve four main courses or eight side dishes with this recipe – which, thankfully, only calls for half a cup of pomegranate seeds.

We hope you enjoy preparing these healthy, international dishes for your family. Contact us to learn about fun enrichment activities for your child, including cooking classes, our Health Nuts workshops, City Adventures, and more!

4 Ways To Savor The End of Summer in NYC

How to Choose Extracurricular Activities for Your Child
Scroll to top