Taking it to the Piggy Bank

Home | Taking it to the Piggy Bank

There is a lot of discourse as to when to start allowance with children. As an educator, I believe that as soon as a child is old enough to start asking for things at the store, they are old enough to earn an allowance and begin to lean about money management. 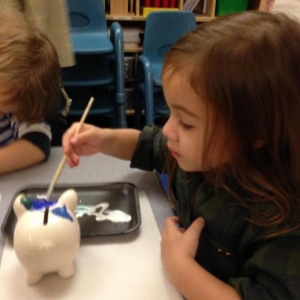 There are two different schools of thought on allowance. The first is that children earn a base amount that is handed over each week, on time, no questions asked. It says that you should not make allowance behavior based or use it as a reward or punishment. This school of thought suggests that in addition to the base allowance, each job or chore asked of the child has a price attached to it and this gets accumulated and paid out on a set schedule.

The system I have created for families is somewhere in between and I believe meshes with the lifestyle and family dynamics of our community. It consists of a Monday through Friday based allowance schedule where the children will earn money each day as if being paid out on a job. The job is based on a combination of household responsibilities and general expectations of behavior and attitude.

It can be up to individual families how much each child should earn per day or week. One suggestion is to give them an amount in dollars per week that equals their age. Each evening before bed it will be noted with a sticker on a responsibility calendar whether or not the child, ultimately based on the decision of the parents, earned their daily allowance. Of course, this can be discussed if the children disagree. Constructive dialogue is encouraged but it cannot be fought. If the children do not receive allowance, the reason will be noted on their calendar in lieu of a sticker.

Responsibilities are expected to be completed every day of the week, including the weekends as determined by parents. On weekends, certain expectations can be slightly different than those of the school week. The same goes for vacation although it is important to make understood that certain rules and responsibilities apply everywhere, all the time. If there was particularly positive or negative behavior over the weekend, it should be noted on the calendar and will affect long-term rewards and consequences.

It is important to note that allowance doesn’t mean you can’t buy things for your children. It also doesn’t mean they can’t earn extra money for specialty jobs asked of them. As children start to want big ticket items or become more motivated by money, it is ok to use it as an incentive to take on additional responsibilities. If they earn extra money from a job, that can be noted on the calendar and paid out in addition to allowance on payday.

But in order for this to work it is crucial that you hand over a thoughtful, realistic list of things for which you will no longer be paying and what you expect your child to pay for. Additionally, it is very important to pay on time every week. By not paying on time, you teach your children that we can be late paying our bills. In order to teach them to value and be responsible with money, you must do the same. I suggest tallying up the daily stickers and paying every Friday before bed or Saturday before you leave the house for the day.

In this system, I encourage families to set-up three banks: one for spending, one for saving, and one for giving (charity). Usually 10-20% of their allowance should be contributed to saving (for items more expensive than their weekly allowance) and another 10-20% for giving. I believe that children must contribute money to charity whether they earned $25, $5, or no money over the week. A helpful website that can help you keep track of these three bank balances is threejars.com. Once the monetary amount of what is in the charity bank is significant, each child can help to determine how it gets used with the help of an adult.

Remember to gently remind children about a rule if it is being broken or a responsibility that isn’t being fulfilled, but don’t threaten with allowance money or what they will or won’t get. Children are children and forgetfulness, emotional outbursts, and disagreements will happen. It is our job to teach them to be open to discussing things in a mature and proactive manner. We must lead by example.