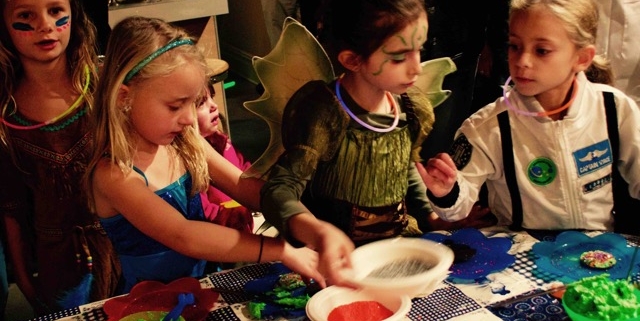 Wondering where to trick-or-treat in NYC? On October 31st, it’s a vast wonderland of spooky displays, generous treats, and good old-fashioned gangs of costumed kids. Fortunately, you don’t have to live in a particular neighborhood to take advantage of its Halloween bounty. Neighborhood-hopping is commonplace and, in some jurisdictions, encouraged. So here is your guide to our favorite places to celebrate.

Halloween fun is subject to change, of course, but historically, these have been some of the best places for trick-or-treating and festivities in the East End, Brooklyn, and Manhattan:

Since 2009, the mayor has ordered the closing of high-traffic Elm Street to traffic from 3 to 6 pm. Last year, Edible Long Island called Elm Street “the best Halloween block party out East.” The pet parade and shop trick-or-treating down on Main Street in Southampton is another big draw.

Newsday called Huntington one of the most “stroller-friendly towns” on the Island, so it’s a great spot for taking little ones out. Family-friendly festivities kick-off with the 4 p.m. costume parade at the Huntington Post Office on Gerard Street, followed by trick-or-treating at participating shops and beautifully decorated homes.

With over a third of the residents under 18, you can be rest assured there will be loads of little ones filling their sacks with candy in Floral Park, so if you like people-watching, this small village bordering Queens is a must. Homeowners deck out their lawns with spooky displays and put orange lights in the windows of their historic gems.

Garden City is another ideal Nassau neighborhood for trick-or-treating, with majestic homes, towering trees, and wide streets with low car traffic volume. Residents are generous with their candy-giving, and you can hit up the merchants along Seventh Street, too.

The huge party takes place on West 69th Street between Broadway and Central Park West, with candy, inflatables, entertainment, closed-off streets, and police patrols for safety. Locals love the traditional door-to-door candy collecting from the historic Brownstones down leaf-covered streets the best. Decked-out prewar buildings on 78th and 79th streets between Columbus and Amsterdam attract crowds. For equally good décor and fewer crowds, you can try 87th or 90th between Columbus and Amsterdam.

Residents are serious about their Halloween displays in Garden Place and Grace Court Alley, with fog machines, life-sized mummies, coffins, and jack o’lanterns aplenty. For a quieter residential experience, head to nearby Remsen and Joralemon streets. Parades and parties take place at Pierrepont Playground at 10 am the Saturday before Halloween.

What Time Is Trick-or-Treating In NYC?

For most residential neighborhoods, trick-or-treating can begin as early as 5:30 and generally wraps up around 8:30. The commercial stretches are different. Little ghosts and goblins arrive as early as 9:30 am to trick-or-treat on Lexington, Third, and Madison. One candy store shopkeeper had refilled her candy bucket four times by 2:30 in the afternoon! Elm Street trick-or-treating goes from 3-6 pm. Upper West Side businesses stop handing out treats at 7 pm due to the rising popularity in recent years.

Shine brings structured activities to your Halloween party fun. Whether your kids are six months or 12 years, we’ve got games, ghost stories, crafts, songs, and cooking that will entertain, instruct, and inspire.  Contact us for details on how we can help you plan the ultimate holiday party. For ideas you can do yourself at home, be sure to check out our Celebrate Halloween Pinterest board.

The Importance of Music in Early Childhood Development
Scroll to top